THE prospect of Storm Dennis did its best to decimate the race fixtures but a small number of races survived and featured nice performances from Horwich RMI Harriers. Sadly, the South East Lancs cross country race at Yarrow Valley had to be cancelled due to the inundation of water from the previous storm. 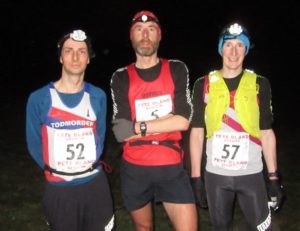 On Friday evening at Tockholes, Darwen Dashers hosted the unique Mr Sparkle’s Dark ‘Un fell race. Organiser Simon Fox said it may be the last running of the race, news which will sadden many runners from near and far. This year Simon set the race off under starry skies and on boggy ground with Horwich’s Mark Walsh and Suzanne Budgett helping out on marshalling. There was a fine run from Andrew Worster from Todmorden to win the race with a clear margin of more than three minutes from Horwich’s Dan Gilbert in second place. Gilbert had the consolation of the first MV40 prize. Gary Chadderton also had a good race and was second MV50 despite a tumble on the final descent. 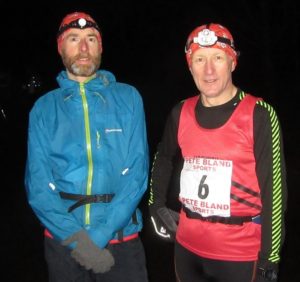 On Saturday the organisers of the Bleasdale Circle race, on the edge of Bowland, bravely went ahead with the race over a shortened route out and again it was a Horwich RMI Harrier, Danny Hope, that took second place and the MV40 prize. He was within 15 seconds of winner Sam Harrison from Bowland.

Sunday saw the 50th running of the Parbold Hill race, which sells out each year. On this occasion, for the first time in some years, Horwich achieved a team result with the friendly squad of what used to be the beginners group taking 24th place. Paul Lewis led the men’s quartet home with Neil Wilkes, Tony Varley and Andrew Storey in close order. Tony Varley was second M70, a tribute to his careful training and race regime since, a couple of years ago, he was looking at knee replacements but great physio since and wise choices have rejuvenated his running career. Julie Williamson and Jeanette Lewis also competed well and would have enjoyed a decent women’s team result if there had been two more women joining them. 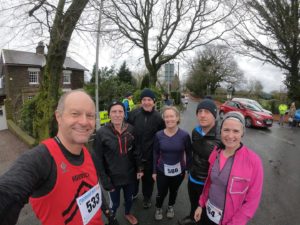 On Sunday, Williamson also took on the Great North West half marathon at a windy Blackpool where Geoff Leech was on pacing duties and achieved an almost perfect time of two hours to assist other runners not used to running the distance. But it was Richard O’Reilly who was top Horwich runner and achieved a new personal best for the distance.

Parkrunners are also stoic characters and on Saturday Robert Seddon claimed his fourth venue scalp with first place at South Manchester in a cracking time of 17:16. Even faster though was James Scott-Farrington at Newcastle Parkrun, where he was first in a time of 15:44. This was the sixth parkrun venue where he has achieved a first place. Glyn Kay failed to get his fifth successive fourth place at different venues but went one better in finishing third at Chadderton Hall.

It’s the Murder Mile and it’s a mystery. Who will win this wonderful trophy (or something a bit like it!) next **Wednesday, 17th August at Gingham Brow in Horwich, 6.45pm** start so turn up early to register, only £2 to take part. All club members and guests are welcome too to help solve this mystery. Or just come along for a fun run on the sunny hills above Horwich. Tony Hesketh will be your compère so it’s going to be good. ... See MoreSee Less

Just letting our juniors know that the Murder Mile is open to Juniors with Seniors racing together everyone sets off together ... See MoreSee Less
View on Facebook
· Share

Louis 1st u9 and Harry 1st u13 at Boulsworth Fell Race this morning. Harry has achieved 1st place overall in u13 and Louis 2nd place overall in u9 in the Pendle and Burnley Grand Prix series of races. ... See MoreSee Less

Harriers pair shine bright on the biggest of stages

HORWICH Harriers are celebrating two world-class performances this week at the World Under-20 championships in Colombia and at the Commonwealth...
View on Facebook
· Share