ENGLISH 200m champion Sophie Walton brought home a silver medal at the same distance in the England Athletics Indoor Age Group Championships 200m at the National Indoor Athletics Centre in Sheffield. Her coach, Trevor Williams said the talented young sprinter was extremely pleased with her second place as she ran quicker in each round and achieved a season’s best in the final, in which Success Edaan of Sale Harriers was just too quick on the day. The result sets Walton – one of Horwich RMI Harriers’ brightest young stars – up for more success once the outdoor season gets under way. 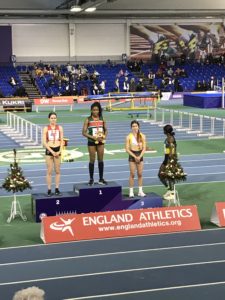 Also indoors but at SportcCity in Manchester for the latest round of the Sale Harriers Open series, Ola Abidogun’s very quick 7.25secs in the 60m brought him second place. Ryan McCaffery took on three disciplines for the first time indoors, competing in the u15 60m, 200m and high jump.

The cross-country season reached its climax with the National Championships taking place in the deer park at Wollaton Hall in Nottingham. A small but enthusiastic squad of Harriers represented Horwich and, though the men could not muster a team to tackle the 12km course. Ian Conroy had top spot for the Harriers. 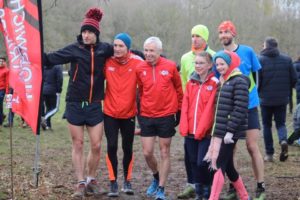 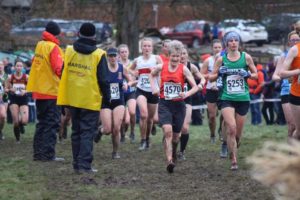 Janet Rashleigh was Horwich’s sole representative in the women’s race. She put in a typically strong run but no senior age category prizes are awarded in the national and regional cross country races. Charlotte Wilkinson and Emma Bradley ran the u13 race and Aidan McKenna was Horwich’s only boy at the event. In the u17 men’s race Toby Middleton and Robert Seddon finished in the top half with half a minute separating them. 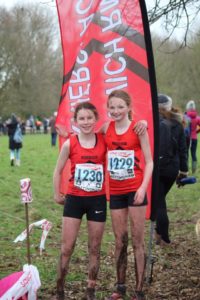 The trail race at Standish Hall is renowned for its mud and this week did not disappoint. Izzy Kneale made it a family affair as she competed with her husband Martyn and son Thomas and achieved second of 25 F50 runners. David Barnes also ran and was the first of fourteen M60 runners. But neither could match the performance of Joe Mercer, who had won the Stockport trail half marathon in a field of 417 runners the previous Sunday. 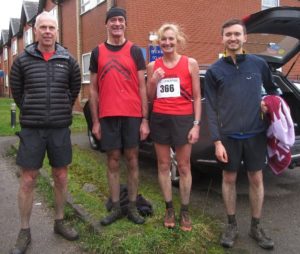 In the Winter Hill 10k at Walker Fold, Tony Hesketh – who ran the Haigh Woodland parkrun the previous day – is clearly making great progress following injury and he took his customary first-placed M70 position in tough conditions with several inches of water on many of the paths. At the other end of the age range, in the associated one-mile Winter Hill fun run, Harry Yates was the winner.

Lucas Collings was second at the Queens Park junior parkrun where three members of the Parker family –Archie, Evie and Polly – made their first runs on Sunday. Jamie Rockliffe racked up his 121st junior parkrun in the same event.

Tatton display sets up a grand finale for Horwich

Well done to all the Juniors at the Sportshall athletics in Manchester on Sunday. A few quick pictures... more to follow during the week, once I've sorted through them. Took a few more than I thought. ... See MoreSee Less

A quick reminder of the fund raising meeting tonight - Wednesday 26th at the bridge pub in Horwich at 7pm, everyone is welcome to come along to find out more. We desperately need more people to support the group and if we can get 4-5 more people I can promise the time commitment is no more than 2 hours a month, 1 hour for a meeting and sometimes 1 hour of work for follow ups and actions. You don’t have to attend every meeting and the format is very relaxed. If you come along and decide it isn’t for you, that’s fine, but come and see what we are trying to do for the club, for you as athletes, or for your children or grandchildren, feel free to ask what we have raised, what we have spent it on and what our plans are, and you can decide afterwards if this is something for you.We will also be shortly starting planning for the Autumn Fair (Yes after last years we need to start planning earlier to are it easier) So we will also be looking for a separate group of volunteers to organise our 2nd Fayre. This years should be easier as we learnt a lot from last years and also have all the contacts etc that we started from scratch with last year. But we do need at least 10 committed people to make this work. This does mean attending most monthly meeting and being able to take ownership for a small task each that you are comfortable with. If you are able to support this event and spare some time from march to sept then please drop me a message via Facebook messenger or what’s app (07368112948) and I can let you have the details of the first meeting for the Fayre. Many thanksColin Andreassen, Paul Battye, Adele Marie McCaffery, Katie Lever, David Barnes, Alyson Cullen. ... See MoreSee Less
View on Facebook
· Share

A few more of the Juniors from Yesterday's Sporthall Athletics... ... See MoreSee Less