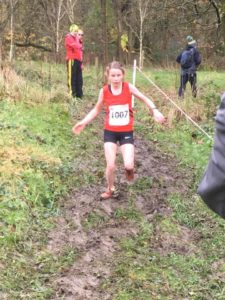 HORWICH youngster Charlotte Wilkinson secured the under-13 girls’ championship for 2019 at the Red Rose Cross Country League fixture at Todmorden Having already won at Leigh and Bolton, she triumphed in the race at the weekend as well, supported by Emma Bradley and Imogen Andreassen to give the team second place. A second win for Harriers saw the team of Toby Middleton, Luke Brindle and Robert Seddon win in the u17s’ race. There was also a full men’s team for Horwich at Todmorden who earned a creditable seventh place out of 14 teams as James Titmuss and Mark Walsh featured strongly. Steve Williams and Tony Hesketh each won their age categories and Doug Fleming was second in his. 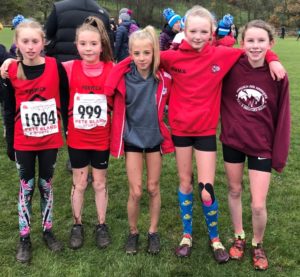 under-13 girls at Red Rose XC – photo by Glynne Lever

The Manchester League achieved a participation of more than 1,300 competitors across all age groups and got off to a good start for Harriers as the three women involved put in fine performances. If they had had a fourth team member they would have been in with a great chance of a top-10 team place. As it was, the trio were led home by Rowen Pymm – three places ahead of Janet Rashleigh, who was a clear winner of the F55 category, and Kimberley Chadderton, who was closing in so all three finished within 33 seconds of each other. 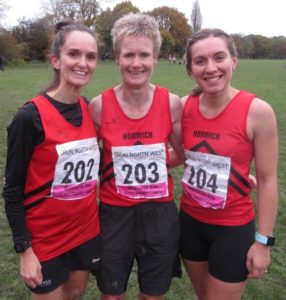 Then there were 14 Harriers in the men’s race with the A team defending fourth place after the first race last month. The A team duly finished fifth out of 70 teams, thus remaining fourth out of 10 in the top flight after two races with two more to go. James Kevan, Phil Marsden and Joe Mercer all had top-25 places in a field of more than 500 men. The B team was 23rd and the Vets team, led by Nick Leigh, took second place on the day which was enough to take the team to top spot as Salford dropped two places behind. 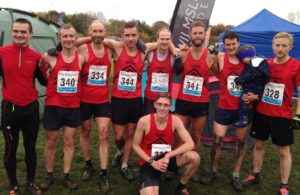 On the road at Lytham eight Harriers ran in the Windmill Remembrance 10k including Richard O’Reilly, who recovered well from the cross country the day before to compete again. At Whitworth, a great friend of running in the North West, Andy O’Sullivan, was honoured with a big turnout for the 5k multi-terrain race around Cowm reservoir – one of many races he has organised for many years, raising thousands for charity. Horwich’s Rob Jackson was the first M50 runner home, pipping his age-category rival, Danny Bennett, of Rochdale, by one second in finishing 13th overall. 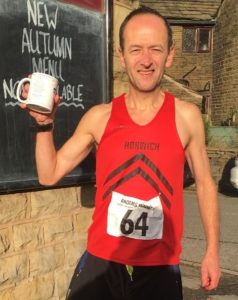 With so much other activity for the Harriers it was a quiet week in parkrun. At the hilly Witton course in Blackburn, Graham Schofield, the veteran fell specialist, made a rare parkrun appearance in seventh place and in the Queens Park junior parkrun, Aidan McKenna and Aleksander Clayden were third and fourth.