YOUNG Horwich Harrier Charlotte Wilkinson sealed her series title at under-13 with yet another win in the final Red Rose Cross Country League meeting at Marl Pits. She was one of 46 Harriers – ranging from under-11s to over-75s – competing in Rossendale on Saturday and she also helped the team to third place on the day, being joined by Emma Bradley, Imogen Andreassen and Lois Bowl to take third place in the series. On the day, the u11 girls’ team of Georgia Clarkson, Grace Mort and Gracie Sherbourne also finished third but just missed out on third place in the series. 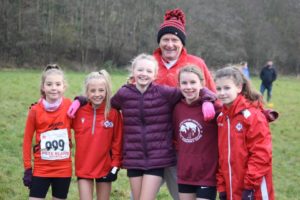 The u15 boys’ team of Zack Taylor, Isaac Battye, Ben Hall and Ethan Isaacs won their series title by taking first place on the day too. while the u17 men’s team of Robert Seddon, Luke Brindle and Thomas Massey won their series despite finishing only third on the day, having done enough in the previous three fixtures to secure the title. 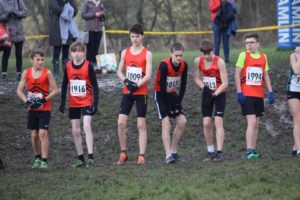 u-15 winners at Red Rose XC – photo by Janette Bradley 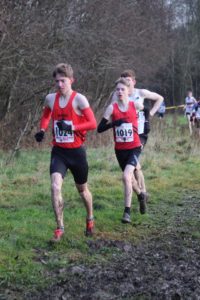 Emma Collings was the sole Horwich woman running in the event and in a steadily-improving season achieved 13th in the L40 series. The men had success on the day, too, with age-category wins for Stephen Williams (M65), Tony Hesketh (M70) and John Parker (M75). For Williams and Hesketh, it also earned them the series titles for their category. Series third places were also achieved by Mark Walsh (M50) and Doug Fleming (M60). This all resulted in a good fourth place out of 16 men’s team in the vets series for Horwich.

It was also one of the club’s vets who recorded the only fell result this week as David Barnes took on the Cardington Cracker aiming to repeat his third-placed M60 series results in the previous two years’ Shropshire Winter Hill series. 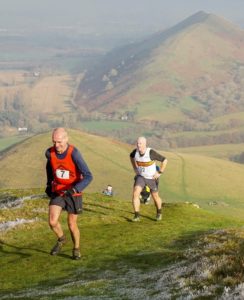 After the autumn break, the track and field athletes were back in action in the relative warmth of the SportCity arena for the first Sale Open meeting of the winter indoor season. Ola Abidogun ran for the first time since the World Para Athletics Championships in Dubai and got a 7.17secs personal best for the 60 metres. In his first year at u20, Niall Maloney ran an impressive 7.34 PB in the 60m and Nathan Hargreaves also ran a good 7.77 PB. Maloney followed this up with four good jumps in long jump, winning the competition with a best of 6.27m. 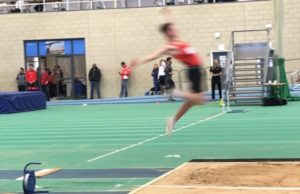 Sophie Walton, after a multi-championship winning 2019 summer season, returned for second place against young men in the 60m, running 7.78. Nathan Hargreaves, Walton and Isabella Merritt, in her first year at u17, all ran 300m and had their best runs of the day. Hargreaves was second with a strong PB of 38.86, while Walton stormed away and won her heat in a PB of 40.80. Merritt also won her heat in a good 43.64. There were five PBs on the first indoor competition since March – a very good return for the Harriers. 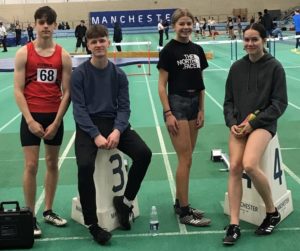