TWO families of Horwich members proved how accessible running is for everyone this week – all in the presence of the founder of the ever-growing parkrun idea. At the Ramsbottom Summer Mile, Paul Sinton-Hewitt, the founder of parkrun, was in attendance and the Collings family were happy to meet a man who has transformed running with a simple idea of timed runs across the world from its humble starting point in Bushey Park in 2004. Almost to prove that universality, Horwich’s Toby Middleton was first at the Whistler parkrun in British Columbia and Jane Kay took part in the Parkrun de Rouen in France. Closer to home, Alastair Murray was the club’s other first place parkrunner this week at Haigh Woodland. Luke Brindle maintained his fine parkrun record with second at place at Brotton parkrun in North Yorkshire and Maria Lowe was second woman at South Manchester. 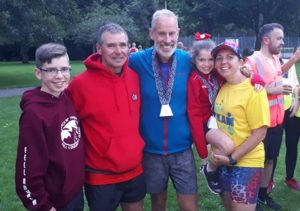 The following evening at Astley Park there were four members of the Collings family running and four of the Wilkinson family also took part in the popular trail race, the last in the series this year. The big winner was Isaac Battye who won the junior race on the night and sealed the series win too. Charlotte Wilkinson was second female finisher and also the first F12, with her brother Jacob winning the M5 category. In the series, Charlotte was second female and Emma Bradley was third, while Jack Barrago was fourth overall in the series. 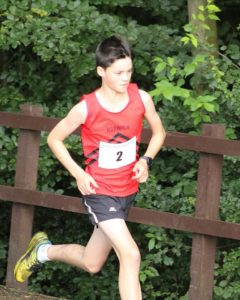 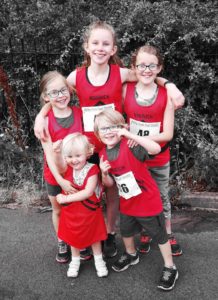 There were two age-category winners this week. Nick Leigh showed he is not just a first-rate fell runner at the competitive Sale Sizzler 5k when he was 13th overall and first M40, maintaining his UK top-100 ranking. In the same race, Georgia Heath was third placed under-20 female. The other age-category first place was achieved by Steve Williams at the Ramsbottom Summer Mile. The following evening he was second M60 at Astley Park where an ex-Horwich man now running for Northern Masters, Paul Muller, won the M60 prize on the night and in the series. Other than that it was a week for second places in the age categories with eight runners up at various races. Gareth Booth was second M40 at Astley Park but it was Glyn Kay, in finishing third M40 on the night at Astley Park, who took second place in the M40 age category for the series. Kay had taken second place in the M45 category at Ramsbottom the previous evening and Ian Collings was second M40 there. 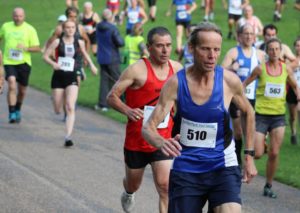 Rossendale Harriers hold a series of four midweek fell races in August and Lee Mill was the first venue where Dan Gilbert had finished seventh the previous week. This week, at Pilgrims Cross on the Holcombe Moors, he finished sixth and second M40. He was joined by Mark Walsh, who was second M50, and David Barnes, who was second M60. Meanwhile, Julie Williamson, after her incredible 100-mile Lakeland performance two weeks ago, was back on the local flat terrain at the Leigh Community 10k road race, happy with her pacing of each kilometre.