HORWICH’S Julie Williamson was the toast of the club after completing the tough Montane Lakeland 100 at the fourth attempt. The event is a 100-mile trail race with more than 22,000 feet of ascent and Williamson completed it on Sunday morning in Coniston after more than 38 hours of running and walking over many of the Lakes’ passes and fells. She had obviously got all the preparation right after completing the Lakeland Trails 100k race at the end of June. But the result is still incredible considering Williamson only took up running at the age of 39 and has now won the L50 category in one of the toughest trail races in the UK. Simon Vaughan and Chris Lowe completed the 50-mile race as first-timers and in the wet conditions too. 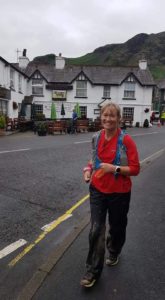 The Lake District is a mecca for runners and the Ambleside Sports event offered all sorts of traditional Lakeland activities including two fell races. In the short, 1.7 miles and 800 feet of ascent Ambleside Sports fell race, Neil Holding won his age category at M50 and in the under-17 race, Toby Middleton had a fine third-place finish. In the nine-mile, 3,000 feet ascent of the Rydal Round race, Dan Gilbert put in another top performance with James Titmuss and Marcus Taylor in company. 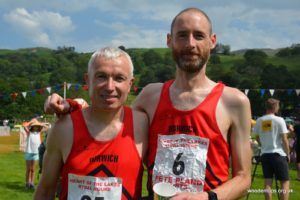 Marcus Taylor & Dan Gilbert at Rydal Round – photo by woodentops.org.uk

The Harriers had also had a great club effort at the Snowdon International race last week. This race is part of the World Mountain championships and attracts elite national teams for the 10-mile tough up-and-down race. Horwich had the best three-man club result, even beating the north Wales-based Eryri Harriers as Alistair Thornton led the team home with Ian Conroy and Alex Fowler all in the top 75 of the 600-plus field. Thornton then went on to Harrock Hill in midweek to get third place with Suzanne Budgett wining the L55 category. 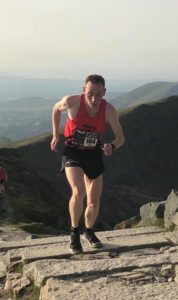 It was a relatively quiet week for the juniors as the school year drew to a close but there was a lovely recognition of young sporting endeavour by Horwich Parish School which has annual awards including for sporting achievement. This year two of the Harriers’ junior squad, Izzy Pennington and Ben Topham, were the proud recipients of the trophies. 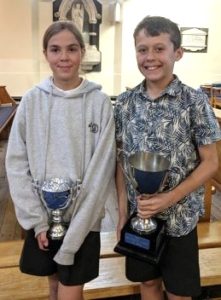 On the track, Rob Jackson flew back from a holiday break and was straight on to the Ashton-under-Lyne track to win the silver medal in the Northern Masters 5,000m V50 race in hot conditions and then followed that up with the Run Heaton Park 10k last weekend in damp conditions, showing he is a man for all seasons by winning the M50 prize in 38mins 53secs.

In parkrun, Michael Chadderton made it a second first place for the Harriers in recent weeks at Worsley Woods and Rowen Pymm was first woman at Stamford Park. Lynn Smith has only one more parkrun to go for a coveted 200 T-shirt after her latest run at Pennington Flash.