HAVING won the English Schools 200m title last weekend, Sophie Walton rose to the occasion at the Schools International Athletics meet in Swansea on Saturday, having been selected to run for England in an event that brings together the best young track-and-field athletes in Britain and Ireland. Sophie had a double gold triumph in the individual 200m and the 4x100m relay. 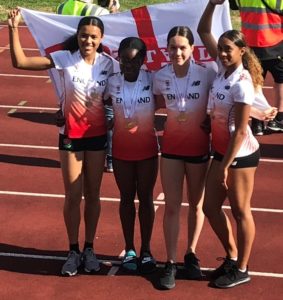 The line-up for the 200m race had five of the top six girls in Britain running and in lane six Sophie flew out of her blocks, caught and passed the two girls outside her after 80m and then kept her composure, romping home four metres in front of second place to take first in a good 24.65 time. Sophie then ran on leg three in the 4x100m relay and winning another gold with the team running 47.27, putting them first in the rankings. Sophie’s coach, Trevor Williams, said: “Sophie can’t believe her success in the last two weeks and she is looking forward to the National Championships in Bedford in August.” 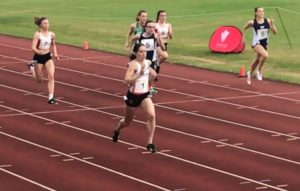 For the seniors the highlight of the week was Ola Abidogun’s great second place at the IAAF Diamond League Meeting at the Olympic Stadium in London, achieved with a new personal best time of 11.05 in taking second place in the T44-64 100m. International stages don’t come any bigger than that outside the Olympics/Paralympics. Horwich’s Jubilee road race series came to a climax with Karl Billington and Thomas Blaney of Blackburn Harriers taking first and second on the night and in the overall series. Laura Lombard of Bolton United Harriers was the ladies winner for the second race running but it was Chorley’s Katherine Klunder that took the ladies series title with a fine set of results. Sam Wardle was Horwich’s top runner on the night in third place and Erica Booth was first L40. In the series Ste Williams and Rudolf Maciejkowicz were the highest-finishing Horwich runners and each won their age-category prize.

Nick Leigh continues to have a storming year on the fells and was third at Ingleborough this weekend, winning the strong M40 category. Dan Gilbert is also consistently achieving top-10 results and this weekend also won the M40 prize too in finishing seventh overall. Gilbert is currently leading the Area Grand Prix fell series M40 category after three second places in 2016 to 2018. Turnslack is the next round in the grand prix this weekend. 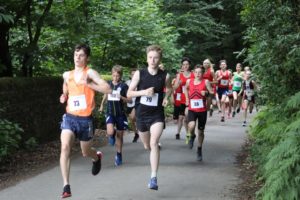 There was also a big squad of Horwich juniors at the YDL event where Emma Bradley (1200m), Ethan Isaacs (high jump) and Harvey Kenny (long jump) all won events while also achieving personal bests in other events. In junior parkrun Aleks Clayden got his seventh first place at Queens Park and equalled his personal best time of 8:02. 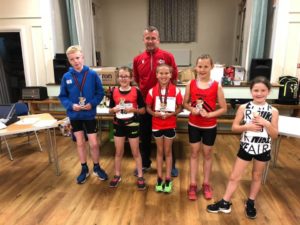 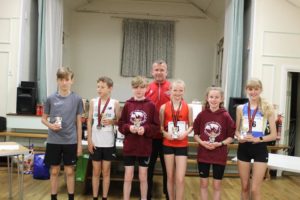