IT was a big week for racing in Horwich with Mad Bull’s midweek Curley’s 5k series coming to a conclusion with a race triumph by Nick Leigh and a first place for Erica Booth in the women’s race. Glyn Kay sealed second place overall in the three-race series and there were also series age-category wins for Isaline Kneale, Linda Webb, Gail Maxfield, Kay and Steve Williams.

After the Curley’s event, it was on to the club’s iconic Rivington Pike race with a history going back more than 120 years. This year there were entrants from more than 70 clubs and a hot day saw long lines of spectators all the way up to the Pike. 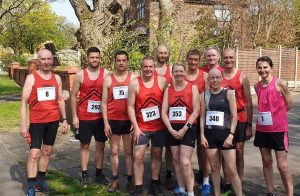 They witnessed some fine fell racing as Daniel Haworth, of Matlock, had a clear lead over Michael Cayton, of Ribble Valley, and Ben Bergstrand, of Middlesbrough, at the top before Cayton put on a superb display of descending to go one better than last year when, as a Horwich runner, he had finished second. Sarah McCormack, of Ambleside, finished 11th overall to win the ladies’ trophy, while Daniel Haworth, who also went one better than last year, won the Cyril Hodgson Trophy for the first runner to the tower – named in honour of the Harriers’ stalwart who as well as being club chairman in the 1960s marshalled the Pike race at the top for more than 30 years. 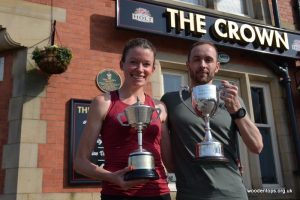 Isaline Kneale repeated her success from last year when running for Burnden to win the F50 category – this year in Horwich’s colours – but was 2½ minutes behind Janet Rashleigh who won the F55 category in style. 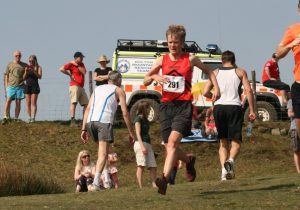 The men’s team of Danny Hope, Gareth Booth, Luke Brindle and James Titmuss won the team prize with Brindle also winning the under-20 trophy. John Parker and Ray Stafford won the M70 and M80 categories, respectively, on a day that saw a good turnout of Harriers. Stafford beat the all-time M80 record by three minutes, while several Harriers and parents of junior Harriers made their debuts in the Pike race, inspired by the juniors who earlier had put on a great display of enthusiastic fell running, including Isaac Battye and Samuel Bradley both finishing second at u15s and u13s, respectively. The race gets valued support from Horwich Rotary and sponsorship from Walsh Sports and the Crown pub was the venue for the prizegiving where runners were also entertained with morris dancing by teams from Horwich, Rivington and others from as far afield as Essex and Wakefield. 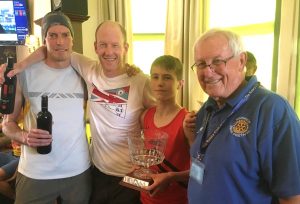 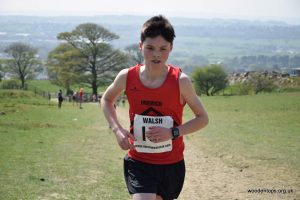 Isaac Battye – 2nd under-15 at Pike race – photo by woodentops.org.uk

The previous weekend there were fine efforts by the juniors at the Wigan Open event. Niall Maloney, Emma Bradley and Pip Nuttall were all second at their events and Beth Pendlebury won at shot putt. The sole senior Harrier competing was Ola Abidogun, who won the 100m. There were three firsts for the Harriers at parkrun this week with Phil Marsden at Witton, Milly Lever at Hafan Pwllheli and Charlotte Wilkinson at Queens Park after a third place the previous day in the u15 Pike race.

The winner of the Young Persons Contribution To Health and Wellbeing. 💪 ... See MoreSee Less

Any others athletes wanting to take part in this great event which is sportshall athletics. Great introduction to athletics competitions, a wonderful fun team event and indoors over winter ❄️ 🏃🏽‍♀️🏃🏼😄. You don’t have to do them all but it’s better if you can?? ... See MoreSee Less

Red Moss 5k Saturday 25th September 2k juniors (8.30am start) & 5k seniors (9am start) Please note that this will be the last ever race so if you still want to race just let Glynne Lever know or myself Pre entries only so what does that mean. You just say ‘yes’ to wanting to run. Simple as that Those that have their own numbers please wear them again. For those that haven’t raced before a number will be supplied on the morning The Start is approx 300m further down from the large Next building on aspinall way on the middle brook retail park Specifically it’s the junction of aspinall way and futura park business park. Just behind this junction is a stile leading into the red moss wood. Cheers ... See MoreSee Less
View on Facebook
· Share

Last chance to register for tomorrows Senior club 5K and Junior club 2k. This will be the last one that we will be running and will be a great warm up for the juniors cross country season. Just comment below or message Myself or Martyn Bell to enter. ... See MoreSee Less