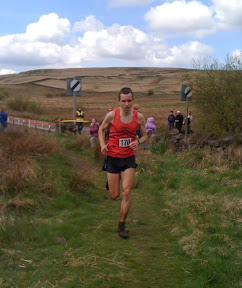 A large field of 118 started this race which was also the Greater Manchester Fell Championships. The weather was cool and dry with good conditions underfoot. Within half a mile of the start six had broken away with Alastair Murray just clear of a group contain Simon Parkinson and Dionne Allen. After the first tough climb Alastair had extended the lead which he held on to the finish and was well clear of second to achieve a well deserved victory, Simon Parkinson ran strongly for third place. Albert Sunter had a superb run just holding off Dionne for first over fifty with Dionne an excellent second lady. With Ian Hamer 10th we easily won the Team award. With the Ladies also winning with Michelle Devine and Rachel Metcalfe both well placed and backing up Dionne. Tony Hesketh was first o/60 with Tony Varley second. With 17 runners from Horwich we were the largest club represented a superb turnout.

Link to results at ukresults.

Link to photos at SportSunday.

What do you think today? ... See MoreSee Less

Wow something we’ve not seen all year... a fell race!
Friday evening Luke Brindle and Toby went up to Ambleside for the Wansfell uphill only time trial. It was a mere 2.5km but with a stinging 400m height gain 😬- not sure what took them so long! It was Luke’s 3rd fell race and he did a very credible 18:46. Toby had the carrot of the current U20 world champion to chase down and completed in 16:02 finishing 11th overall. Fantastic event and good to see friends we’ve missed all year.

On Sunday we went down to Mallory Park racing circuit for a fast 5Km. A fell race only 40 hours earlier possibly wasn’t best preparation for a fast time but Toby ran a very solid 15:23 - he lead his wave from the gun to finish line. Those time trials we all did in the summer paid off! ... See MoreSee Less

What do you think for today’s caption photo? ... See MoreSee Less

David Barnes do you think it would be possible to see if Jason Middleton’s article about Toby &Lukes uphill race could be sent to the Bolton News
It might’ve a bit of motivator to some of the folks With nothing going on at the moment
Thanks ... See MoreSee Less